According to a recent study by the Eyecare Trust – a U.K. charity that promotes eye health – around 12% of the U.K. population has a visual impairment that prevents people from seeing 3D images when watching 3D TV. Instead, they see a blurry image, and can suffer headaches and eye strain as a result.

How does 3D TV work?

We see depth when images from our left and right eyes merge into one; to re-create that in high definition, TVs must refresh the picture at least 120 times a second with alternating frames for the left and right eyes. This tricks the brain into seeing only one image. An infrared or radio beam synchronizes shutter glasses with the screen to produce the final 3D effect.

To get the full effect of 3D, viewers must have good stereopsis (binocular vision), and they need to have that both statically (for still objects) and dynamically (for objects in motion). For people who wear glasses with even a small amount of static or dynamic aniseikonia, the 3D effect is lost because the images aren’t the same size on the retinas and the brain can’t figure out which image is supposed to appear in front.

How can the SHAW lens help?

The SHAW lens solves aniseikonia and improves binocular or stereo vision. This can help viewers see the 3D in 3D TV. 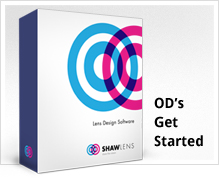